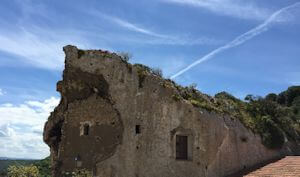 Our apartments and holiday homes are situated only 7 miles far from Sedini.

Sedini is a small town which still maintains intact its natural beauty, archaeological and cultural treasures; amongst them is the famous elephant rock.

Some of the country churches are of historical importance such as S.Nicola di Silanis, S.Pancrazio, Sant'Anna ans the Church of the Assumption. Equally important and worthy of a vistit is Domus de Janas which from town overlooks onto the valley of Salinas.

The Domus de Janas sets itself apart from other Domuses. Excavated out of an enormous rock, initially composed of just two rooms (entry and main room). Later during the period of copper age more lateral rooms were added, in the middle ages it was used as a prison and in the 900s it finally became a home (like it is now), when walls and an attic were added.

There are many caves on the territory of the City of Sedini and also the Nuraghe, Lu Padru on the high area of the town.